Cows used to produce milk that protects against HIV… 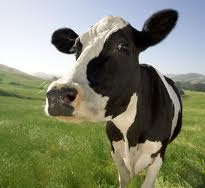 Despite the misgivings that many people have surrounding cow’s milk, it is a good source of nutrients such as calcium and vitamin D. Now, thanks to scientists at Melbourne University, special milk may also be used to protect people from HIV. Working with the Australian biotechnology company Immuron Ltd, a team led by Dr. Marit Kramski has vaccinated pregnant cows with an HIV protein – the first milk that those animals produced after giving birth contained HIV-disabling antibodies.

While cows cannot contract HIV themselves, they do nonetheless produce antibodies in response to the introduction of the foreign protein. Those antibodies are passed along in the colostrum, or first milk – that milk already has a naturally high antibody content, in order to protect newborn calves against infections.

In laboratory tests, the milk-derived HIV antibodies were found to bind with HIV, inhibiting it from entering human cells.

Instead of administering the milk orally, Kramski and her team plan on using it to create a cream. Women could then apply that cream to their vaginas before and/or after sex, to prevent HIV infection. While other institutes are also developing HIV “microbicides,” the Melbourne technology is reportedly an easier and less expensive method of producing them.

Animal and human trials are now being planned.