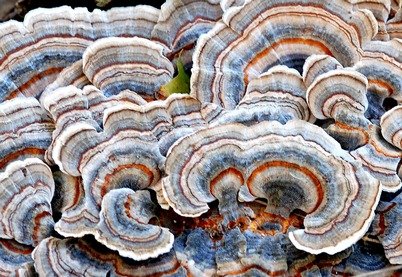 PHILADELPHIA — Dogs with hemangiosarcoma that were treated with a compound derived from the Coriolus versicolor mushroom had the longest survival times ever reported for dogs with the disease. These promising findings offer hope that the compound may one day offer cancer patients — human and canine alike — a viable alternative or complementary treatment to traditional chemotherapies.

The study was conducted by two University of Pennsylvania School of Veterinary Medicine faculty.Dorothy Cimino Brown is professor and chair of the Department of Clinical Studies and director of theVeterinary Clinical Investigation Center. Jennifer Reetz is an attending radiologist in the Department of Clinical Studies. They published their findings in an open-access article in the journal Evidence-Based Complementary and Alternative Medicine.

The Coriolus versicolor mushroom, known commonly as the Yunzhi mushroom, has been used in traditional Chinese medicine for more than 2,000 years. The compound in the mushroom that is believed to have immune-boosting properties is polysaccharopeptide, or PSP. In the last two decades, some studies have suggested that PSP also has a tumor-fighting effect.

“There have been a series of studies looking at groups of people with cancer,” Cimino Brown said. “The issue with those studies is that they weren’t necessarily measuring what most people would think is the most clinically important result, which is, do people taking PSP live longer?”

To address this critical question, Cimino Brown and Reetz pursued a study in dogs with naturally occurring hemangiosarcoma, an aggressive, invasive cancer that arises from the blood cells and typically affects the spleen. It commonly strikes golden retrievers and German shepherds.

Fifteen dogs that had been diagnosed with hemangiosarcoma participated in the trial. Divided into three groups of five, each group received a different dose — 25, 50 or 100 mg/kg/day — of I’m-Yunity, a formulation of PSP that has been tested for consistency and good manufacturing processes.

The owners were instructed to give their dog capsules of I’m-Yunity, compounded by Penn pharmacists, daily. Each month, the owners brought their dogs to Penn’s Ryan Veterinary Hospital for follow-up visits. There, the researchers took blood samples and conducted ultrasounds to determine the extent that tumors developed or grew and spread in the dogs’ bodies.

Based on the ultimate endpoints — how quickly the tumors progressed and how long the dogs actually lived — the results of the researchers’ trial suggest that the I’m-Yunity was effectively fighting the tumors.

“We were shocked,” Cimino Brown said. “Prior to this, the longest reported median survival time of dogs with hemangiosarcoma of the spleen that underwent no further treatment was 86 days. We had dogs that lived beyond a year with nothing other than this mushroom as treatment.”

The results were so surprising, in fact, that the researchers asked Penn Vet pathologists to recheck the dogs’ tissue biopsies to make sure that the dogs really had the disease.